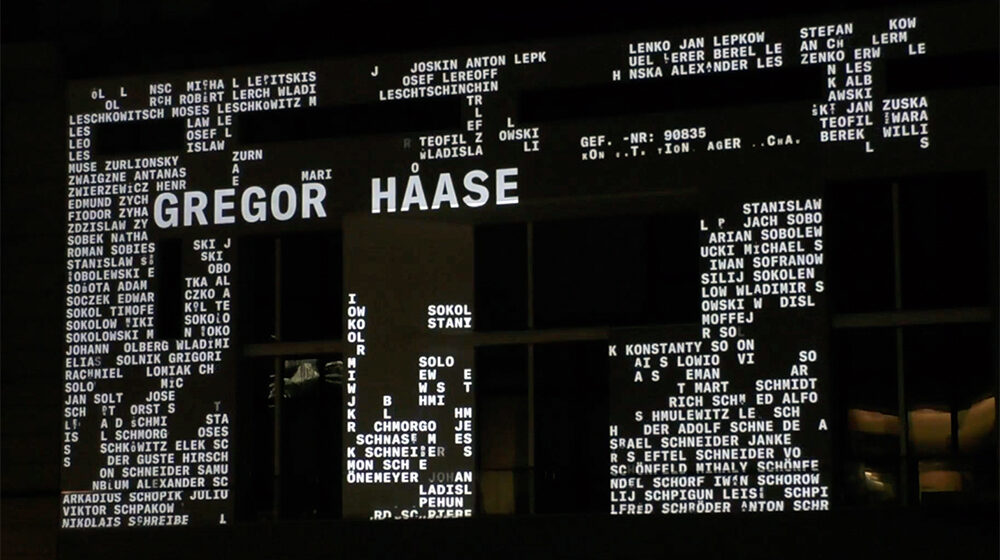 Before the Nazis sent him to a concentration camp, Dresden-born Gregor Haase had already spent several years in prison. He was subsequently held prisoner in various concentration camps for just under two years. We do not know whether he survived the liberation in a sub-camp of the Flossenbürg concentration camp.

Gregor Haase was born in Dresden on June 26, 1893, and lived with his wife Erna in Komotau, now called Chomutov, in the Czech Republic. He was an electrical engineer and was arrested in 1940 on charges of homosexuality and sexual abuse of minors, for which he received a prison sentence.

However, after serving his three-year sentence, he was not released, but was placed in so-called protective custody for an indefinite period of time without having received another conviction. This meant being sent to a concentration camp. The idea was for people whom the National Socialists regarded as their opponents or as inferior human beings to be excluded from German society in this way. The system of categorization applied to the prisoners in the camps was closely linked to this ideology.

When Gregor was transferred to the Buchenwald concentration camp on June 17, 1943, the “Homosexual Paragraph 175” was deleted from his documents, and he was registered as a sex offender under the prisoner category “career criminal” and given prisoner number 1385. “Career criminal” was a category generally applied to prisoners in concentration camps who had already served long or multiple sentences for prior convictions, regardless of the nature or severity of their crimes. They had to wear a green triangle on their prisoner clothing for identification purposes.

From Buchenwald to Warsaw

Gregor stayed in Buchenwald for only a few weeks. In July 1943, he was put on a transport of 300 prisoners who were being transferred to the Warsaw concentration camp. After the suppression of the Warsaw Ghetto Uprising, only ruins of the former ghetto remained. The German occupiers were setting up a concentration camp there to enable them to use prisoners from the Auschwitz concentration camp to clear the rubble and salvage usable material. Prisoners from Buchenwald were brought to Warsaw to help the SS build the camp. As prisoner functionaries, these prisoners occupied a position somewhere between the SS and the other prisoners.

The SS tended to select German prisoners from the ranks of those who were categorized as career criminals to fulfil such roles. Firstly, because they could speak German, and secondly, because as “criminals” they had the reputation of enforcing the SS’s regime of terror over their fellow prisoners with great brutality. However, even they did not have any real freedom of choice, but these prisoners did at least have some room for maneuver. Not only did they have certain privileges and belong to the camp’s elite, but in the Warsaw concentration camp, they also had almost unlimited power over their fellow inmates. How they used or abused that power was entirely up to them. What role Gregory played is unknown.

The Warsaw concentration camp existed for only about a year because the Red Army was already on the other side of the River Vistula by the end of July 1944, and the SS decided to clear the camp. About 4,000 prisoners were sent on a foot march in a westerly direction. Once they reached Kutno, they were sent on in freight cars.

To the documents about Gregor Haase in the online archive

Gregor and the other survivors of the transport reached the Dachau concentration camp on August 6. Gregor Haase was registered there under prisoner number 90835, but this time as a homosexual. It is no longer possible to say with any certainty what the real reasons behind this categorization were or indeed what the reasons behind his previous categorization in Buchenwald were. But what we can say with absolute certainty is that being registered as a homosexual put the person concerned in a much worse position in the camp’s social hierarchy. Stigmatization played a contributory role here and continues to color the way certain groups of persecutees are seen to this day.

At the end of August, the SS finally transported Gregor Haase to the Rabstein sub-camp of the Flossenbürg concentration camp, where the prisoners were deployed as forced laborers and had to build an underground aircraft factory during the last months of the war. It is unclear whether he was among the prisoners whom the SS simply left behind in a barn when the war ended on May 8, 1945. On foot, the journey back to his hometown of Komotau would have been a little more than 85 kilometers long.

We do not know very much about Gregor Haase, and the little we do know is gleaned from documents that were created by the SS and by the Nazi judiciary and primarily reflect the perspective of the perpetrators. Gregor’s story is neither simple nor clear-cut. The background to his conviction is unknown, nor do we have any information about his activities in the Warsaw concentration camp. However, there is no doubt about the personal injustices that were done to him when he was imprisoned without a conviction and deported to various concentration camps.

The media installation aims to draw attention to fates like his so that we can find out more about the real people behind categories like “career criminals,” “criminals,” or “anti-social elements.”