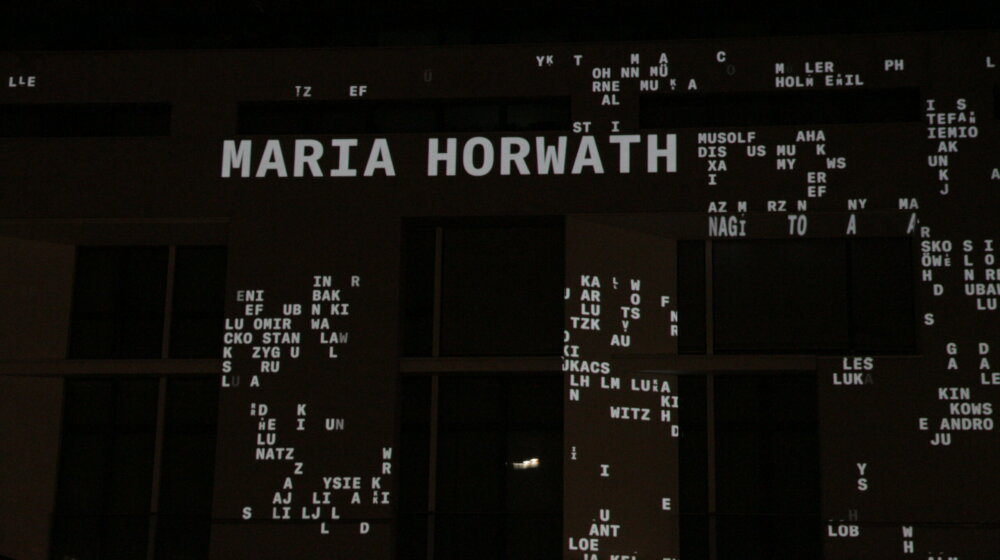 The Sinti and Roma minorities have been marginalized and discriminated against in Europe for centuries. The National Socialists began a campaign of persecution and murder against them in 1933, accusing them of being “gypsies” and “anti-social elements.” The Nazis deprived them of the right to life for racist reasons. Maria Horváth was persecuted as a young Romnja. She survived concentration camp imprisonment, but was scarred for life by what happened to her.

Maria Horváth was born on August 13, 1930 in Ondód, now Torony, Hungary. She grew up there in a settlement called Dense, isolated from the Hungarian majority population. When the German Wehrmacht invaded Hungary in March 1944 and the fascist “Arrow Cross Party” came to power, antiziganist policies became more and more aggressive. In August 1944, the men of the Roma community were deported to do forced labor. It is not known whether Maria’s father was among them.

In early November 1944, local gendarmes arrested Maria, her family, and her neighbors in her home village, not far from the Hungarian-Austrian border. The reason for their arrest was the fact that they belonged to the Roma minority. First they were brought to the city of Szombathely, the county seat, and from there they were transported to the assembly camp in Fort Csillag in Komárno. The Hungarian authorities rounded up several thousand people there, hundreds died in the terrible conditions.

Sinti and Roma minorities from the German Reich and from the occupied territories had begun to be deported to Auschwitz-Birkenau concentration and extermination camp in February 1943 already. They were housed there in an area of the camp known as the “Gypsy Family Camp.” In August 1944, the SS liquidated this camp and murdered over 20,000 Sinti and Roma in the gas chambers.

Porajmos is the Romani term for the genocide of European Sinti and Roma during the Nazi era. The exact number of victims is unknown.

Maria was deported to Dachau concentration camp by train along with a number of other women from Ondód. The journey was a terrible ordeal in itself: four days in very cramped conditions and without access to water. The group of women that Maria belonged to spent only a few weeks in Dachau concentration camp before the SS transported them to Ravensbrück women’s concentration camp. Here SS doctors performed medical experiments on the women, 14-year-old Maria included. In the winter of 1944/45, Jewish and Romani women were also subjected to forced sterilization by injection.

Forced sterilizations were carried out with the aim of making it impossible for minorities as such to reproduce. The Nazi state created the legal basis for rendering people infertile in 1933 already, when it passed the “Law for the Prevention of Hereditarily Diseased Offspring.” Sinti and Roma minorities were classified as “ant-social elements” or as “feeble-minded” because of their lack of schooling, their lack of vocational training, or their lack of a permanent job, and because of their “gypsy way of life.” Forced sterilization was extremely painful. Maria probably had to endure this procedure too. Between 500 and 700 sterilizations were performed without anesthesia or painkillers at Ravensbrück concentration camp.

With the “Auschwitz Decree” of December 1942, Heinrich Himmler not only ordered that Sinti and Roma be sent to the “Auschwitz-Birkenau Gypsy Family Camp,” but also that sterilization be sought for all those who were not deported. This was a means of extorting people’s consent to their own sterilization as it enabled them to escape deportation.

Maria spent less than two months in Ravensbrück. On January 19, 1945, the SS sent her on to Zwodau, a sub-camp of Flossenbürg concentration camp, along with some of the other women from Ondód. Once they got there, the women were used as forced labor. They built coils, switches, and measuring devices for Siemens. The concentration camp was evacuated on April 20 as American troops were approaching, and the women were sent on a senseless and grueling march. Three days later, they returned to the camp. US troops liberated the survivors on May 7, 1945.

See all documents on Maria Horváth in the online archive

Maria went back to her home village after the liberation. Of the 40 women deported in November 1944, only ten returned. In the 1960s, she fought for compensation for the damage caused to her by the medical experiments she was subjected to as a young girl.

Pharrajimos: The Fate of the Roma During the Holocaust, by Janos Barsony and Agnes Daroczi, 2007